Saving Grace: A Lesson in Storytelling from Peloton 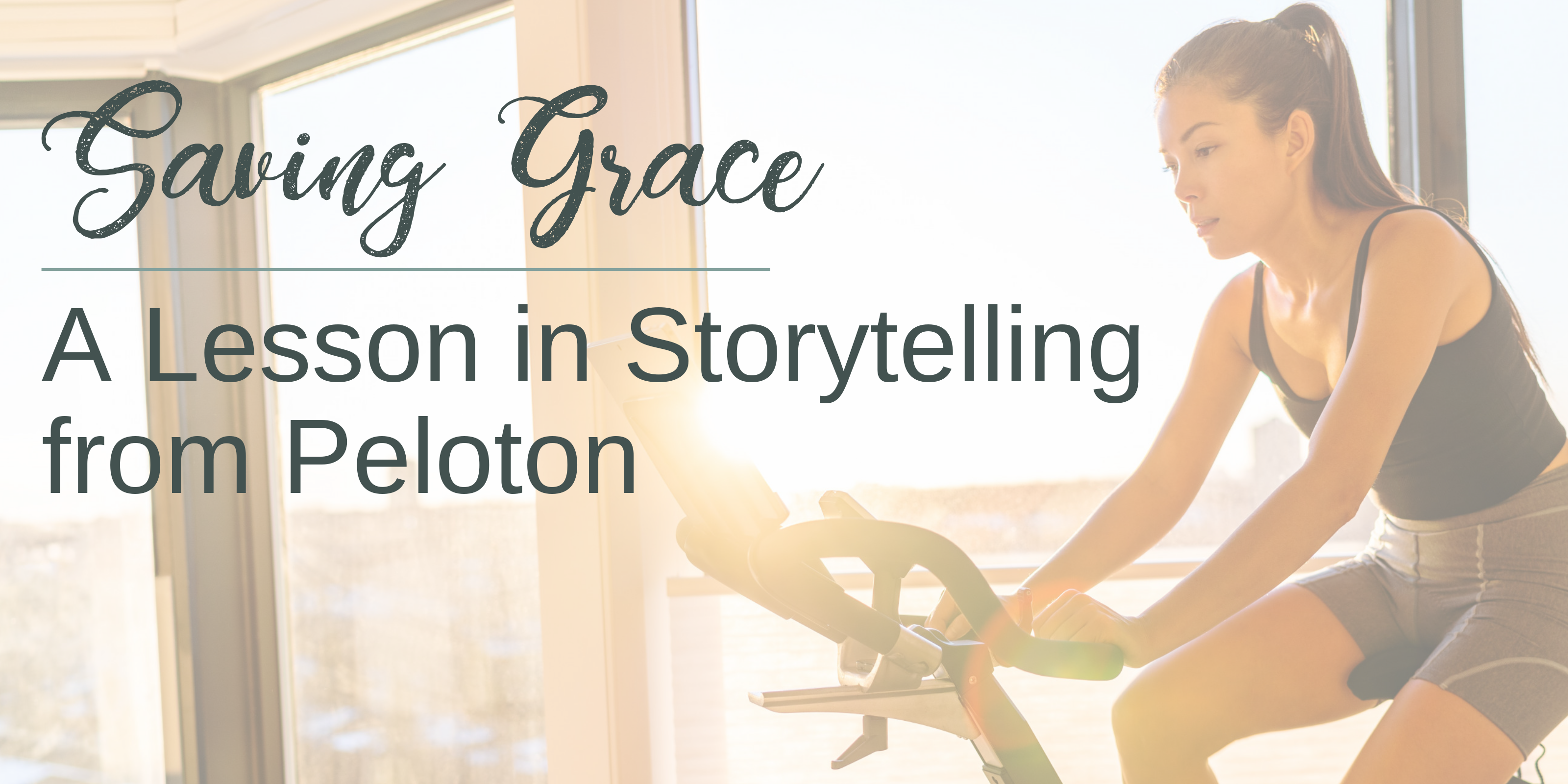 Saving Grace: A Lesson in Storytelling from Peloton

Twas the Night Before Christmas…

The year is 2019 and a thin, seemingly wealthy Grace from Boston wakes up on Christmas morning to find a shiny new Peloton bike in her elegantly festive living room, gifted by her husband. Grace happily receives the bike. On her first ride she is scared, but excited. Grace begins to document her Peloton journey via video while her daughter plays in the background. We learn she is a working mother who does not like mornings. As time passes, Grace becomes more comfortable on the Peloton. The following Christmas, Grace gives her husband a daily video log. She tells him she didn’t know how much Peloton would change her. End scene.

Every Good Story Has a Why

Well, it’s Friday and the internet has a lot of opinions. Potential classism, sexism, and body-shaming aside – not that these aren’t incredibly valid concerns, they just aren’t what I’d like to address in this particular piece – Peloton’s story has no… story. JB Ashtin is built on storytelling. We live and breathe it. Each element of our client’s data is broken down and effectively rebuilt to communicate a story grounded in its most centrical piece – the patient. In fact, storytelling has been so embedded into my DNA that when I see a story miss the mark as strongly as Peloton’s ad does, it kind of hurts my heart a little.

Yes, the commercial shows a human being affected by their product, but it fails to include vital elements of storytelling; most significantly the why behind it all. As viewers, we’re brought into Grace’s journey while she documents her every ride, and claims change as an end result. Still, we learn nothing about her. Rather than focus on unmet need, this ad leaves us with even more questions.

Grace’s well-being has been the internet’s prime topic this week. Her story is written in glimpses and shreds with no real meat, leaving us as viewers confused and concerned. We’ve got some questions.

Why does Grace want a Peloton bike? Why as a seemingly thin, fit, wealthy woman is she afraid of the stationary bike in her living room? Why does Grace continue to use the Peloton? Does it have distinct features or capabilities that make it stand out from its competition? Most importantly, why does Grace feel owning a Peloton has changed her? Visibly, she looks no different. If Peloton is responsible for some kind of boost in confidence, I’m going to need to know why her confidence is lacking to begin with.

The issue with a patchy narrative is that it requires the audience to play a guessing game based on what the characters are communicating. This leaves far too much of the story open to interpretation, and assumption is rarely a good thing. Grace’s husband could be gifting her an exercise bike because he’s kind, supportive, and it was the first thing on her Christmas list. Alternatively, he could be pushing a harmful and archaic idea of perfectionistic body image. The vagueness of Grace’s story has left Peloton in hot water.

When a story is ineffectively communicated, its values become overshadowed by unaddressed details. A story’s impact can only be as strong as its message. Losing sight of this has the potential to be detrimental to a product’s brand, reputation, and client base. Our own scientific storytelling expert, Pete Luongo, MD, dives deeper into the importance of thorough and impactful communication in storytelling here.

So here we are, weeks after Peloton’s ad has been released, pondering the details of a young woman’s journey to…something? It’s not really clear. They say there’s no such thing as bad publicity, but both Peloton’s stock and reputation have taken a significant hit. What’s most unfortunate is the missed opportunity to communicate a relatable and empowering story.

With the right background and a clear why, Grace could be one of the millions of inspiring women in today’s society who are actively balancing career and motherhood, while still incorporating time to focus on their own health and well-being. Instead, Grace is the subject of memes and Blair Witch Project comparisons.

Peloton’s mistake was a simple but consequential lesson in storytelling. It serves as a friendly reminder to always remember why we’re telling our stories. When we lose sight of the people we impact, we lose sight of our purpose. It’s our purpose that gives stories their soul. This holiday season, give the gift of a clear and impactful story. Grace, the internet, and the world will thank you.